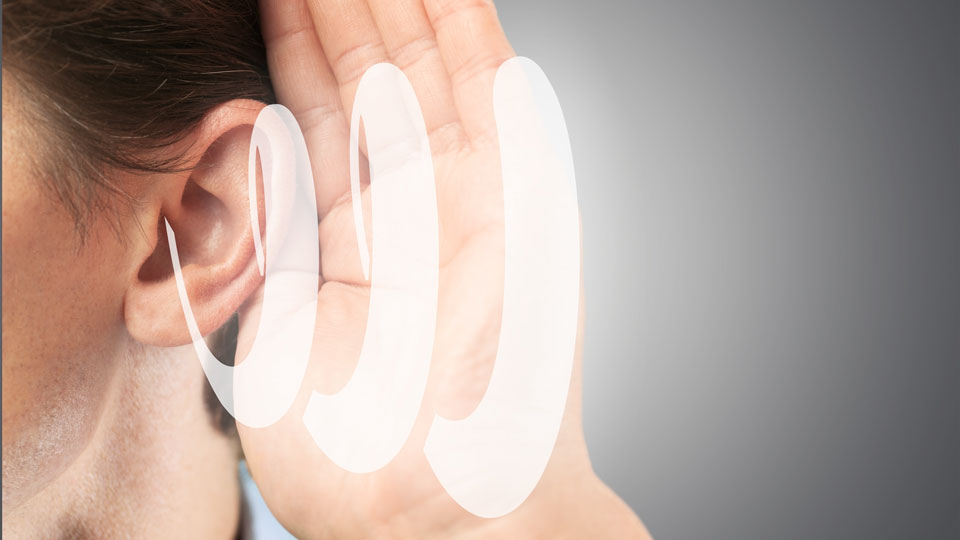 Our two ears act like radar antenna to register acoustic signals coming from multiple directions. The complex structures of each ear process the received signals and pass them to the brain where we interpret our acoustic environment.

Take, for example, the sound of the wind or of an approaching truck: the nearest ear receives the sound slightly earlier than the other and a little louder. Using the finely processed acoustic information from each ear, the brain has the capacity to calculate the direction of the wind or the direction of the truck’s approach and we also “know” approximately how close it is.

Some of the advantages of two properly functioning ears:

The ear is a very complex organ comprising three parts: the outer ear, the middle ear and the inner ear. From the inner ear the auditory nerve transmits information to the brain for processing.

The anatomy of the hearing system can be divided into four components for our convenience in remembering the parts and associating these parts with their function. These divisions are the:

Several structures comprise the outer ear. The most readily seen is the pinna, also called the auricle. The pinna is made up of a frame of cartilage that is covered with skin. The pinna has obvious folds, elevations, depressions and a prominent bowl – all of which vary somewhat from person to person but a basic pattern in these features is fairly universal among all people. The pinna acts as a funnel to collect and direct sound down the ear canal. It also serves to enhance some sounds through its resonance characteristics. Finally, it helps us to appreciate front-back sound localization.

The other structure of the outer ear is the external ear canal. The outer two-thirds of this canal has a cartilaginous framework, and the inner one-third is bony. The skin of the external ear canal is continuous with the skin of the pinna. The ear canal is curved, almost “S” shaped and averages about 1 inch in length in adults. The skin of ear canal has hairs (more prominent in some people) and glands that produce wax called cerumen (also more prominent in some individuals than in others). This hair and cerumen serve a protective function for the ear canal. In addition, cerumen helps to lubricate the skin and keep it moist.

The middle ear begins at the inner end of the external auditory canal, specifically at the eardrum. Also called the tympanic membrane, the eardrum is a thin and delicate membrane stretched across the entire inner end of the ear canal separating the environment from the middle ear. Despite the delicacy of its structure, the tympanic membrane never stops working to transform fluctuations in air pressure known as sound into exact copies in the mechanical domain as vibrations.

The ossicles then convey this mechanical energy to the inner ear at the oval window where the footplate of the stapes sits. It is at this location where the mechanical energy is then transformed into the hydraulic energy that the inner ear processes.The ossicles are suspended from the roof of the middle ear cavity by tiny ligaments, and the malleus is connected to the tympanic membrane by a ligament, as well. In addition, there are two muscles located in the middle ear space. One is called the stapedius. It is attached to the stapes and contracts when very loud sounds are detected.

The inner ear has two divisions: one for hearing, the other for balance. The division for hearing consists of the cochlea and the nerve of hearing. The cochlea is snail-shaped, bony structure that contains three fluid-filled compartments that run the cochlea’s entire length. One compartment is sandwiched between the other two, and it contains the sensory organ for hearing called the organ of Corti. The organ of Corti responds when the hydraulic energy of the cochlear fluid activates its tiny hair cells to release chemical messengers. These messengers then stimulate the nerves of hearing which carry sound stimuli to the brain. The pitch and loudness of the original acoustic signal in the ear canal determine the exact location and the number of hair cells activated on the organ of Corti.

The balance mechanism is also called the vestibular system. It too is made up of a series of fluid-filled compartments (three semi-circular canals and two larger divisions) that contain the sense organs for balance and movement. The vestibular sensors detect angular movements, direction and velocity of the head. This information about equilibrium is sent to the brain by the vestibular nerves, a functionally separate division of the auditory vestibular nerve, the VIIIth cranial nerve.

“Inner ear” is a collective term that encompasses the separate structures for hearing and balance. Once the auditory vestibular nerve reaches the brainstem, the balance system sends its information to brain structures responsible for processing this type of sensory information, whereas the hearing system sends its information to different parts of the brain specifically to extract the sound cues out of the electrical message brought by the nerves of hearing.

THE PROCESS OF “HEARING”

Our ears work to transform the acoustic stimulus that travels down our ear canals into the type of neural code that our brains can recognize, process and understand. It all starts at the tympanic membrane where the physical attributes of the sound are transformed into a mechanical stimulus. This mechanical code is transmitted through the ossicular chain to the stapes footplate where the code is again transformed this time into hydraulic energy for transmission through the fluid-filled cochlea. Finally, when the cochlea’s hair cells are stimulated by the fluid waves a neurochemical event takes place which excites the nerves of hearing. The physical characteristics of the original acoustic signal are preserved at every energy change along the way until this code becomes one that the central auditory pathways can direct to the temporal lobe of the brain for recognition and processing.

The brain and the relay stations along the central auditory pathways can extract not only the pitch and loudness features but also as other critical attributes such as temporal features (timing) and different cues from each ear. Features of the sound stimulus can be extracted, enhanced, and modulated and this information can be compared separately from each ear or combined into a single perception. These features can be compared to other acoustic patterns that are stored in the brain, perhaps for the recognition of the voice of a family member or friend, or they can be the initial experience with a new sound or a new voice.

Our hearing systems anchor us to the soundscape of our environment with an incredible ability to detect and differentiate infinitesimally small acoustic cues. Our brains store the neural equivalents of acoustic patterns – voices, music, environmental sounds, danger signals – that make it easier to process and recognize both familiar and unfamiliar signals. Hearing loss misleads our brain with a loss of audibility (sounds are softer, not as loud) as well as a distortion of the information that reaches the brain. Changes in the effectiveness of the brain to process stimuli, through head trauma, neurologic disease or disorder, or the naturally occurring process of aging, can result in symptoms that mimic hearing loss – inattention, inappropriate responses, confusion, a disconnect from the those around us, for example. The ears and the brain combine in a truly remarkable way to process neural events into the sense of hearing and all that it encompasses. Perhaps it’s fair to say that we “hear” with our brain, not with our ears!

Our ears allow us access to enjoy and experience the many sounds all around us!

Take the proper steps with The Hearing Doctor to protect and rehabilitate your ears so you won’t miss any of the sounds of your life!

Dr. Brandy Vowell, Tulsa Audiologist, will be pleased to answer all your questions regarding hearing loss.

Introduction The following hearing loss check is a means of quickly assessing if you possibly have a hearing loss requiring referral for an objective hearing test and possible hearing solution. This screening is related to objective measures of hearing…

Ringing in the Ears (Tinnitus)

What is Tinnitus? Tinnitus represents one of the most elusive mysteries facing audiologists and other hearing health care professionals. It refers to an auditory perception not directly produced by an external sound. Tinnitus is commonly described as a “hissing,…